“If Only You Would Just Try Harder” 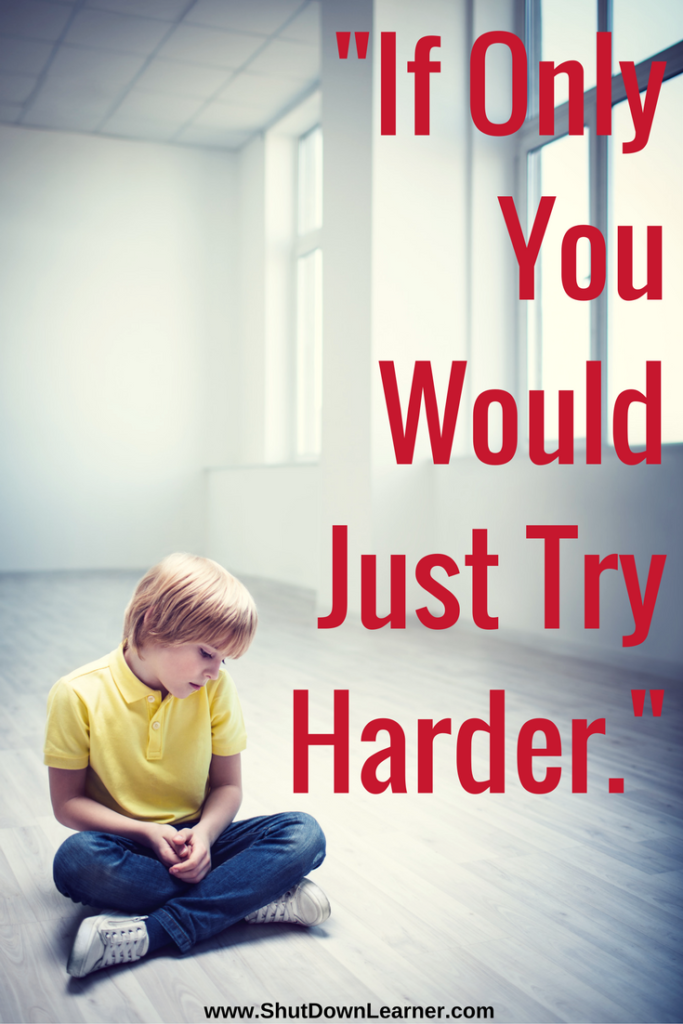 When it comes to kids and their various issues, it’s very hard for us to get past certain notions.   An ongoing one is the notion that the child is just “not paying attention enough,” and that the child just needs to try harder and everything would be ok.

This approach sees things as a motivation deficit.

More often than not there are skill deficits underlying leading to the motivation deficit, things that the kid can’t do very well on a specific task.  With learning disabilities there’s so much variability and unevenness of performance (some things the child does great and others far below average), we get seduced into thinking that the child has a motivation problem (like not trying hard enough)..  There are times when the light bulb is on which leads to the, “See, you can do it if your tried,”

Take young James, age 6.  James seems to be off task a lot in the classroom and at home.  Frequently he is reprimanded for not paying attention or “trying his best.”

When James was evaluated it was clear that certain tasks were beyond his capability.  Most of these involved specific language skills.  For example, when asked “Why” type of questions (like, “Why do we wash our hands before eating?”), James could not respond.  He gazed at the wall, seeming to not pay attention.

Also quite challenging for James was his ability to form categories and explain how things were alike (such as a dog and a horse).  James just repeated the last word, “horse,” but had no understanding of how to make a similarity or category.

In contrast when given vocabulary tasks that asked to tell the meaning of a given word such as, “What is a bird,” James gave a reasonable response.  James was also able to point to pictures of a word when prompted to do so (e.g., “Show me the penguin.”).

James also functioned fairly well when given hands- on type of tasks that had reduced language involvement.

In short, James was  variable with particular difficulty with certain functions of language.  When those type of tasks were given (i.e., making similarities, forming categories, answering “why”), James looked very disconnected and off task.  In all likelihood people were starting to question whether he had ADD and whether he needed medication.

I wasn’t going in that direction with James.

First and foremost, James was struggling with language usage.  What did he need beside good language interventions?  As a start:

Slowing it down for James and paying attention to a few of these points goes a long way.

Things are not always what they seem.

Sometimes paying attention and trying harder are not the issue.

In no particular order here are 20 reasons why kids don’t pay attention:

Oh, yeah.  I almost forgot.  Maybe the kid has ADD/ADHD.

Too bad, though,  we often jump to that conclusion all too quickly before considering all kinds of other factors like in the above list.

There’s a lot going on inside and outside a kid’s head.

How is #Dyslexia Screening Different From Other Assessments?

TThere is much talk these days about screening for dyslexia.  Businesses are scrambling to put forth the product that schools will purchase so that they are compliant with emerging screening legislation.

Perhaps less important than the actual test is understanding how a screening is different from other types of assessments. (see: https://shutdownlearner.com/dyslexia-screening-book/).

Screening involves the first of three different levels that can be conducted in a dyslexia assessment. (The three levels are as follows:

Screening focuses on a specific set of skills that help predict a child’s performance on a larger set of skills that ultimately make up adequate reading. For example, a screening tests phonemic awareness – a sub-skill of reading (which will be explained later) – because it is a good indicator of a child’s early reading ability. However, screening does not examine all the skills that make up the more complex process of reading, such as reading comprehension and other contributing cognitive processes.   A more in-depth testing would consider these other factors.

By its nature, screening is a shorter first step. Ultimately, more involved testing may be called for, but the screening allows for early decisions as to who may be at risk.

Following a screening, identified children are typically offered remediation using appropriate evidence-based instruction. If it does not appear that the child is making sufficient progress after a reasonable period (e.g., six months), a more in-depth assessment may be recommended.

When an assessment is conducted outside school, many factors go into deciding which level of assessment a child should undergo. Cost is an important one of these factors. Other factors include the type of assessments previously performed and how recently they were conducted. It is important to keep in mind that, with young children, it is generally good practice to start with a screening. However, I have conducted dyslexia screenings with people of all ages depending upon what is needed at the time.

By definition, a screening should be a brief and narrow band assessment that offer very good prediction as to who may be at risk

To receive blogs and other updates from Dr. Selznick @ Shut Down Learner, go to https://shutdownlearner.com and enter your email address on the home page.

I own a kayak.  Sometimes I think that if I only had a longer kayak, I would go faster.  If I had a longer boat though, then I would have less stability.  If I got a pedal kayak, then I could probably fish easier.  But, then I’d give up the satisfaction that comes from paddling.

With these and other kayaking variables whatever decision is made represents a compromise – I may get this, but I give up that.

I find myself reflecting on compromises when talking to parents about decisions regarding their child in school, particularly when it comes to special education.

It may not be totally satisfying (is any compromise), but no matter the decision  there will be another side to the decision, a compromise.

While you will hopefully be getting something with the decision being made, there is something you will be giving up.

You might say, for example, “Well, I don’t want my child to be missing out on what is being taught in the regular class.”

“Yes, I understand,” I might respond, “but you also want intensive, individualized instruction.  That doesn’t happen in the regular class.  Something has to give.”

Others talk about private school.  Private school might look good on one level, but there is the other side, the compromise with the child  being taken out of the local community into a school that is more than likely a distance from home, with virtually no kids he has known.

If the decoding is the focus of the remedial instructional time, then comprehension and vocabulary typically take a back seat.

You’re getting something, but giving up at the same time.

I’m not suggesting that you simply roll over,  play dead and accept whatever is handed to you, but I do think that the sooner you recognize there is a giving up while you are getting inherent in most special education decisions, then the ‘SEFF’ or  “Special Education Frustration Factor” may be slightly reduced.