Beating Back the Kryptonite (#word problems)

Last week we talked about “marginally ready” children, the ones falling just under the radar screen, who have just enough skill to get themselves in the “average range,” but who limp along every year with many unresolved issues.

For marginally ready kids, there are two major “kryptonites’ out there – you know the deadly stuff they have to face daily.

One of the kryptonites is “open-ended” writing.  Most marginally ready kids haven’t the faintest idea how to organize their thoughts into a coherent essay.  The open-ended  nature of the writing process (e.g., write about your favorite vacation), is particularly problematic.

The other kryptonite is word problems.  To struggling kids both are equally deadly.

Take young Chloe, age, 8, a struggling, marginally ready child.  In second grade she can barely perform operations of addition and subtraction beyond the simplest one digit operations.   She doesn’t understand concept of money or time either.

Here’s a word problem that she had to manage recently:

(Huh? What are they talking about here?)

I know math was never a strong suit of mine, but I was really scratching my head here when I looked at her worksheet.

Chloe drew some nice pictures to accompany the problem, but she didn’t have the faintest idea what  the problem was asking or how to approach it.

Breaking these problems down into visual terms and making a story out of them is one of the best ways to try and counter the kryptonite.  Usually there is an underlying “story” to the word problem, one that can be made into four parts.  Use a white board (kids like white boards) with fun colored markers to have the story (i.e., word problem) come to life. 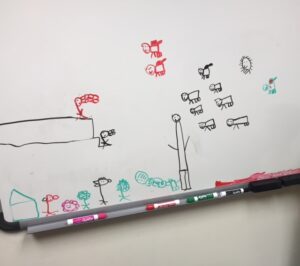 You can also use one white sheet of paper and divide the page into four parts if a white board isn’t readily available.

The bottom line is that word problems can be deadly for the kids of concern.  Word problems like the one above can be particularly deadly because of their inherent confusion.

Even Superman couldn’t defeat kryptonite, but hey, you can beat it back and lessen its power.